The Sage Collective Story: From TSCP to Now

Sage Collective emerged in 2019 with the intention of pursuing affordable, vibrant and high-quality living for older adults. But before we were Sage Collective, we were Tabernacle Senior Citizens Project (TSCP) — and we wouldn’t be where we are today without the history that precedes us. To unpack the TSCP legacy, we spoke with Donna Gaines and Dwain J. Kyles, founding members of the Sage Collective Board of Directors.

Tabernacle Senior Citizens Project began in 1978 as the brainchild of Reverend Louis Rawls, founder and pastor of Tabernacle Missionary Baptist Church on Chicago’s South Side. “Rev. Rawls was a prolific pastor and entrepreneur,” says Dwain J. Kyles. “In his efforts to address the needs of his congregation and the broader community, he established everything from hospitals to hotels to funeral homes. As Rev. Rawls grew older, his focus turned to elderly members of the congregation; and it was then that he decided to create a housing development that would offer safe, affordable and high-quality living for seniors.” Named after his wife, Dr. Rawls built Willa Rawls Manor, a 123-unit housing development adjacent to the Church.

“To say I was connected to Rev. Rawls would be an understatement,” says Kyles. “In the mid- 1950s, my father was the first youth pastor at Tabernacle Missionary Baptist Church, and Rev. Rawls and his wife Willa were my godparents! My mother later moved to Willa Rawls Manor in her golden years.” Deeply invested in the work and its caring intentions, Kyles was quick to jump into action when he realized Rev. Rawls was becoming overwhelmed by the enormity of work required to manage all of the church’s projects in the community..

“Willa Rawls Manor became my passion project,” explains Kyles. “I was working pro-bono, looking to reinvest the time, energy and resources necessary to reinvigorate a building that was falling behind. Luckily, I was dating this amazing woman at the time… Donna had been President of the Board and provided operational oversight for a co-op of considerable size on the South Side, and was a person perfectly equipped to help lead the project, not just with experience, but more importantly, with a strong sense of passion and integrity.”

In inheriting Willa Rawls Manor, Dwain Kyles and Donna Gaines also inherited a building that was in disrepair and a team that was struggling to keep pace with inadequate resources. “I knew we could fix the building’s physical infrastructure,” says Gaines, “but it didn’t mean we could immediately fix how people felt about themselves or how they were living. With my background in social work, and being certified in change management, I knew true changemaking begins and ends with culture. And so that’s where we had to start.”

“We worked tirelessly to get our staff invested in the work they were doing, and to get our residents engaged in the activities and efforts aimed at improving the conditions where they were living. We wanted everyone to have a voice, to feel they were contributing to a broader vision and to invest themselves in that experience. So as we made proactive investments to improve building maintenance and care, we also began to cultivate a culture of staff and residents that really believed in what we did,” tells Gaines.

The impact was tangible: “When we eventually sold Willa Rawls Manor after several decades, what remained was a new culture, one rooted in genuine mutual respect and love,” reflects Gaines. “When we had Christmas parties, rather than hightailing it out of there at five, the maintenance staff would stick around and dance with the older women. It was just pure joy. And when we built a rec room and added a flatscreen TV and nice recliners, we saw the pride residents took in having that space, and caring for it. The culture began at the top with our phenomenal Board Members, but it trickled down and permeated every part of the building — and affected every person.”

“We made the decision to sell Willa Rawls Manor because we saw a greater need. Working within the operational parameters of the Department of Housing and Urban Development limited how far our innovation could go,” explains Gaines. “We had been good stewards of TSCP’s funds and had built up a solid replacement reserve, and there was now appreciable equity in the building. We saw an opportunity to utilize these existing assets, to take the vision of Rev. Rawls to the next level and, with the money acquired from selling Willa Rawls, to design and develop the kind of housing and ancillary programming we know residents need. Having ample finances to do so gave us a greater degree of freedom to be truly expansive in our thinking, and to unleash our vision creatively, passionately and fully.”

Thus, Sage Collective was born. Building on the legacy of TSCP and Rev. Rawls’ vision for safe, affordable, high-quality housing for older adults, Sage Collective seeks to enhance the older adult experience by introducing more vibrant ways of living and experiencing culture, while inviting intergenerational involvement for all to thrive together.

“The intergenerational component is vital to us,” says Gaines, “because just as we continue to carry the torch for Rev. Rawls, we hope to share our gained knowledge and experience with those who follow. Legacy is important to us; people and culture are important to us; and we hope to develop a movement with Sage Collective — a movement that brings like-minded people together as a collective, and a movement that people everywhere can share in and benefit from.” 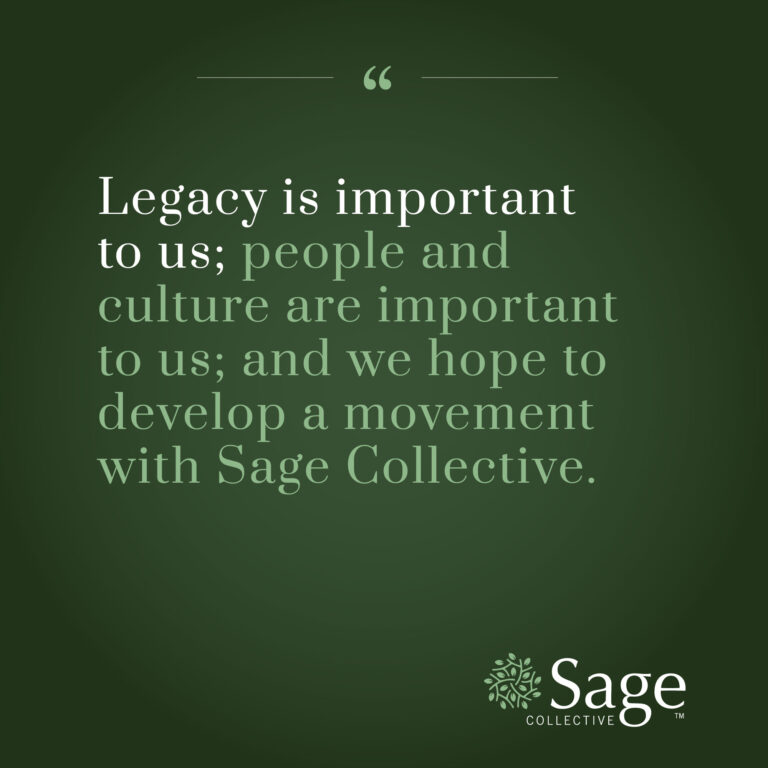