A Brief History of Bronzeville

Sage Collective has begun the process of renovating the first two properties we acquired, since selling Willa Rawls Manor, a 123-unit property we owned and operated for more than 40 years. The two properties are located at  4108 S King Drive and 4112 S King Drive. With the buildings located side-by-side in Chicago’s historic Bronzeville neighborhood, it will provide a tangible benefit to the community by celebrating and uplifting Bronzeville’s dynamic history, current-day culture and residents alike. In honor of this effort and of Black History Month, today we take a moment to look at a brief history of Bronzeville.

With the Great Migration beginning in 1916, African Americans fled lynchings and oppression in the rural South for brighter opportunities in cities in the North. Though segregation was outlawed after the Civil War, racist practices in hiring and housing practices remained steadfast. Many African Americans in Chicago landed in what became the Bronzeville area, there facing higher rent prices and population density (at its highest reaching 300,000 residents strong).

Despite this, true to the African principle of ujamaa, Bronzeville residents created a tight-knit community that boasted a network of black-owned institutions and a cultural vivacity that, in its prime from the 1920s-1950s, even rivaled Harlem.

The community had been growing, but the name Bronzeville only entered the scene in the 1930s, suggested by theater editor for the Chicago Bee (an African American-led daily newspaper with national reach), James Gentry. Gentry posited that African American skin was closer to bronze than black, and selected the name as an empowering alternative to racist nicknames for the neighborhood that had emerged.

Though the official boundaries of Bronzeville are often contested as spanning anywhere from 18th and 67th Street north-south to the Dan Ryan and Lake Michigan west-east, the pulsing heart of Bronzeville landed somewhere in the middle.

WTTW put it best when they said businesses and community institutions like Provident Hospital (where Daniel Hale Williams, an African American, pioneered open-heart surgery), the Wabash YMCA (which established the first Black History Month), the George Cleveland Hall Library, Parkway Community House, Binga Bank (Chicago’s first Black-owned life insurance, realty, and financial institution), and more, “were more than alternatives to racially restricted establishments downtown”. They were pillars of the community which helped to instill pride and contribute to the upward mobility of African Americans.”

Through our vision for vibrant, high-quality and affordable housing for older adults, Sage Collective is proud to contribute to the legacy of African American culture, community and success that is the heart and soul of Bronzeville. 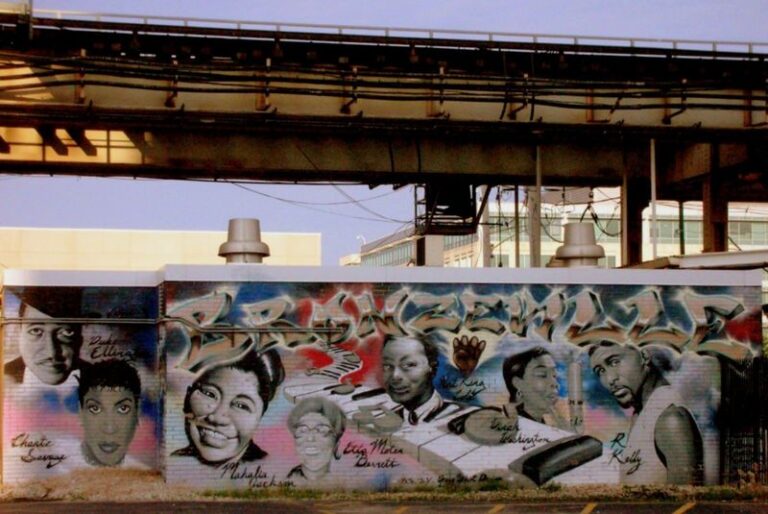 Mural under the “El” tracks in Bronzeville
› Back to top