A Brief History of The South Side Community Arts Center

Widely recognized for its vibrant arts and music scenes, the Bronzeville neighborhood takes pride in its rich past. Throughout history, various venues around the neighborhood have been essential for Black artists across the community. One of Chicago’s Historic Landmarks, The South Side Community Arts Center, is one of those precious places that has had a lasting impact.

Determined to overcome the seemingly never-ending hardships brought by the Great Depression, President Franklin Roosevelt introduced the New Deal and its Work Progress Administration (WPA) to the country. Sponsored by the WPA, The Federal Arts Project (FAP) acted as a subsidiary program to the larger workforce development effort by expanding community art centers across the country.

In 1938, FAP agents visited Chicago in hopes of creating an arts center focused on exhibiting the work of African American artists. Progress on the center’s development advanced once South Side businessman Golden B. Darby emerged as a champion for the project. With his insistence that the center reside on Chicago’s South Side, Darby organized the Community Arts Center Committee to advocate for the center’s location. Members of the committee included local leaders and artists from the Arts and Craft Guild, the lone group for African American artists in the community, including Margaret Burroughs, Eldzier Cortor, Bernard Goss, Charles White, William Carter, Joseph Kersey and Archibald Motley, Jr.

After extensive fundraising through various lavish events, including Margaret Burroughs’ famous “Mile of Dimes” and considerable philanthropy from the Bronzeville community, a property was finally secured at 3831 S Michigan Ave. Originally serving as a residence, the grand brownstone building was nearly 50 years old and in need of considerable renovations and rehabilitation.

After years of remodeling under the careful direction of Bauhaus designers Hin Bredendieck and Nathan Lerner, the restored structure became the South Side Community Arts Center (SSCAC) and featured classrooms, performance and lecture halls and a marvelous gallery. The grand opening showcased an exhibition of the work of numerous local African American artists’ including Charles White, Eldzier Cortor and Archibald Motley Jr, — finally allowing space for artists in the community to thrive.

Following its inauguration, the SSCAC was host to numerous celebrity guests, including First Lady Elenor Roosevelt, who visited the SSCAC in May 1941 to deliver its dedication speech. The address received widespread media attention and was broadcast nationwide via CBS Radio. Less than a year later, the United States entered World War II, and funding for the FAP was significantly reduced.

Throughout The SSCAC’s history, a rich, diverse range of art has graced its famous walls. In 1944, accomplished artist Rex Goreleigh became the SSCAC’s administrative director. Goreleigh furthered the center’s programming, introducing workshops on drawing, painting, sculpture, performing arts, photography and more to the community. Famous writers, including Gwendolyn Brooks, became associated with the SSCAC’s writing center, and legendary musicians like Nat King Cole and his Trio performed there often.

More than 80 years after the center’s founding, The SSCAC stands proud in the Bronzeville neighborhood. After countless renowned exhibitions from distinguished artists, the SSCAC continues to thrive, and has been named a National Treasure and added to the National Register of Historic Places.

Today, The SSCAC remains the only arts center opened by the WPA centered on African American art that is still open in its original building. Permanent collections from the center’s founding artists reside alongside new artwork from emerging artists. A staple of the Bronzeville community, The SSCAC serves as an inspiration for artists and communities across the nation,  and remains vital and relevant as a very special place where connections blossom and relationships prosper.

You can visit The South Side Community Arts Center Tuesday through Saturday from 12 to 4 p.m. Admission is free. However, donations are strongly encouraged to support the center’s future. You can also visit their website here to discover their local events, exhibitions and collections. 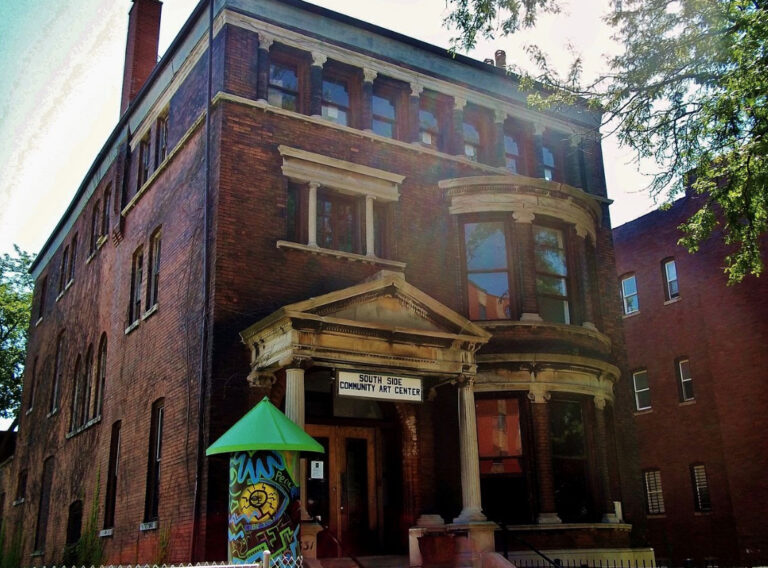 Bronzeville’s South Side Community Arts Center
› Back to top