At Sage Collective, we love spotlighting extraordinary moments throughout African American history and the local monuments that preserve those stories. Today we’re exploring Chicago’s first and only national monument, positioned only 30 minutes south of Bronzeville, where our 4108 and 4112 S. King Drive properties are located: Pullman National Monument.

Nestled in another one of Chicago’s largest African American communities, Pullman National Monument, also known as Pullman Historic District, exhibits one of the country’s most historical sites. Developed by Goerge Pullman in the 1880s, Pullman Historic District originated as the nation’s first planned industrial community for his namesake business, Pullman Palace Car Company. The community, which had established regulations and living standards for all of their employees, contained workers’ living quarters, the Pullman factory, a grand clock tower and the once elegant Hotel Florence, among other buildings.

The Pullman Company experienced the first of many disputes in 1894 with the Pullman Strike. After negotiations over decreased wages were discussed and shut down, Pullman’s workers organized a walk out of the train car factory. The boycott impacted railroad traffic across the whole nation. However, even with support from the American Railway Union, both the boycott and the union collapsed after local and federal governments intervened.

A second conflict over inferior wages and lengthy hours arose in 1925. However, this time, all of those involved were Pullman’s African American workers, who, organized and created the nation’s first all-Black labor union, the Brotherhood of Sleeping Car Porters. Founder A. Philip Randolph and union members fought for more than ten years until finally, in 1937, the first major agreement between a company and an African American union was met. The agreement granted union members increased wages along with a cap of 240 hours per month.

Today, after nearly 140 years of existence, Pullman National Monument is now open to the public. With help from the National Park Foundation, donors and Chicago Neighborhood Initiatives, the historic site underwent extensive renovation and restoration over the past few decades.

The late-Victorian designed Pullman Clock Tower and Administration building act as the centerpiece for 12-acre monument grounds. Inside, guests are greeted in the newly designed visitor center, where information on the monuments’ numerous exhibits and tours is found.

Visitors have the opportunity to gain knowledge about everything from Pullman’s vision for creating the company town to the Pullman Strike and the Brotherhood of Sleeping Car Porters establishment. Along with delving into the campus’ rich history, guests have a chance to learn more about how the latter Pullman community came together to preserve the significant site.

The park is free to the public and open 9 to 5 on most days for those interested in exploring the momentous company town and reducing COVID-19 stress. You can find more information here! 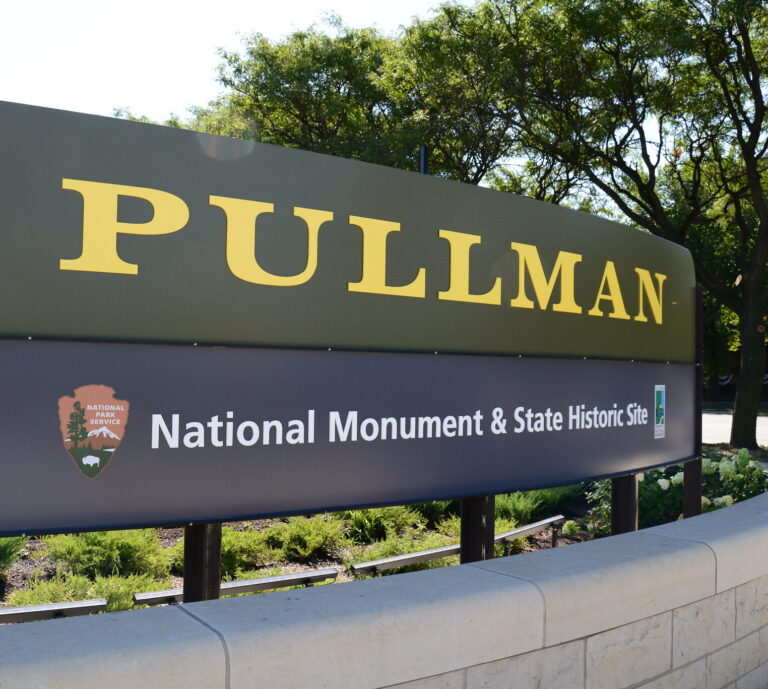